Yesterday the Senate Veterans Affairs and Emergency Preparedness Committee and the House Veterans Affairs and Emergency Preparedness Committee held a joint informational meeting to hear presentations by the PA National Guard and the PA Civil Air Patrol on their missions and capabilities during emergencies, according to Senator Randy Vulakovich, Chairman of the Senate Committee.

Brigadier General Anthony Carrelli, Acting Adjutant General of the PA Department of Military and Veterans Affairs, stated the Department has met with other agencies regarding the full capabilities the Pennsylvania National Guard that enhance the Commonwealth’s ability to respond during an emergency.

“As a result of Winter Storm Jonas, some of our state agencies were not fully aware of the equipment and manpower that National Guard has available in times of need,” said Sen. Vulakovich.  “I am pleased that as a result of our hearings that the Department has met with and will continue to meet with its sister agencies.”

Lt. Colonel Gary Fleming, Wing Commander for the PA Civil Air Patrol gave an overview of the organization, which was formed during World War II by citizens involved in aviation and interested in helping the nation at home.  The Civil Air Patrol later became an official auxiliary of the United States Air Force and is now charged with a three-fold mission – Emergency Services, Aerospace Education, and Cadet Training.

General Carrelli also noted that the Department of Military Affairs and the Civil Air Patrol have recently begun to work together more closely – particularly in regard to planning, programming and budgeting – which will result in better preparedness between both entities.

After the meeting, the Civil Air Patrol re-launched its Legislative Squadron swearing in Senator Vulakovich, as well as other members of the Committees. 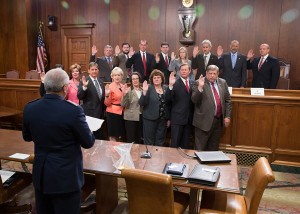 Senator Vulakovich (bottom right), pictured with members and staff of the Senate and House Veterans Affairs and Emergency Preparedness Committees, being sworn into the Legislative Squadron of the Pennsylvania Civil Air Patrol.

More information about state issues is available at Senator Vulakovich’s website, www.senatorvulakovich.com or on Facebook at www.facebook.com/SenatorRandyVulakovich.